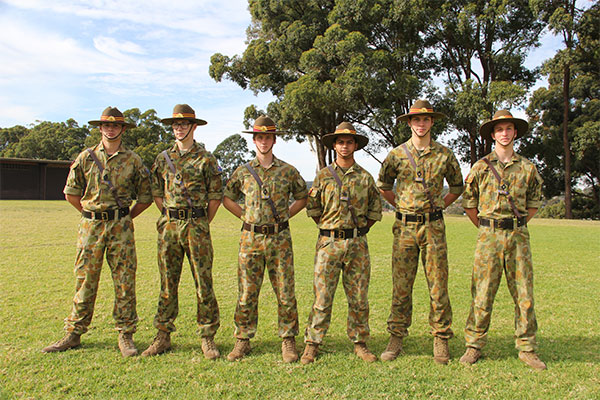 Holy Cross College is the only Catholic systemic school in the country to offer the program, according to the school’s co-curricular coordinator Tim White.

Ryan joined the Cadet program after it was reintroduced to the college in late 2019 after a four decade hiatus.

THE ROAD TO SUCCESS
A recent Year 12 graduate, Ryan has already received an early entry from Macquarie University to study a Bachelor of Clinical Science.

He says the Cadet program “100 percent helped” with his studies, teaching skills that are transferable to the classroom.

“By doing it you’re learning life skills, like how to look after yourself and how to be independent” – Ryan Swain

“You’re able to use those new skills to help yourself academically and to do well with your studies,” Ryan said.

BUILDING SKILLS FOR LIFE
It was Mr White who told Ryan that they were looking for boys to join the returning Cadet Unit.

“I obviously love spending my time doing things – I’m not great with free time – so I was happy to get in there and get involved,” said Ryan, who is also a talented cricketer and rugby league player.

“I thought ‘Yep, that’s a good way for me to give back to the school and be involved in another co-curricular activity’” – Ryan Swain

“When we first started [Cadets], we would have a bi-weekly parade,” Ryan recounted.

“Every second Wednesday afternoon, for a couple of hours after school, everyone in the Unit would stay back.

“That’s when we would go through our parades, do our drill, teach the younger boys the skills they were going to need when we eventually went on the camps at the end of the year.”

“You’re definitely going to make friends and I think it’s something that will open up a lot of doors individually, as you continue to go through your schooling life and outside of school.”